Fairtrade at the Festival

Hay Festival is back with in-person events this year, and today Fairtrade Hay is in the Buttermarket with the usual interesting mix of Fairtrade stalls.  It's a bit of a drizzly day, so the hot drinks will be welcome, but quite a lot of people are about in the centre of town. 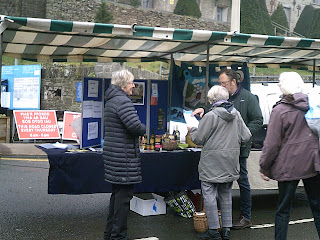 Here's Ange, who sells Zaytoun products from Palestine, and Chris of Haymakers, in charge of the Fairtrade Hay stall on the Thursday Market today, with a selection of products on display and lots of information about what Fairtrade is and how it can change people's lives for the better.
Posted by Eigon at 11:48 No comments:

We're in the first week of Fairtrade Fortnight, and Eighteen Rabbit has a basket of goodies in the window for a prize raffle.

The theme this year is Climate Justice, in the aftermath of the COP26 talks last November.  The message is that there is still time to mitigate the most extreme effects of climate change, but only if pledges are turned into action.  Big changes to the global economy are needed.  On the personal level, people can buy Fairtrade products, but action also has to be taken by governments and multinational companies.  The Fairtrade Foundation is already planning what they want to do for COP27, which will be held in Cairo.

Farmers in poorer countries are already feeling the effects of climate change.  In Honduras, Guatamala and Nicaragua farmers have seen their crops of coffee, cocoa, honey and bananas devastated by extreme weather events.

This was held on the Sunday of Hay Winter Festival in the Buttermarket, and a lot of regular supporters were there - like Love Zimbabwe, Zaytoun, Tools for Self Reliance, Hay2Timbuktu and Jump4Timbuktu.

At 2pm, a minute's silence was held for the 27 people who drowned in the Channel as they attempted to reach the UK.

The weather was not summery.  In fact, it rained rather a lot.  I was so cold I went over to the Hay, Brecon and Talgarth Refugees stall which was selling jumble as well as tea, coffee and cakes, and bought a jumper that I put on straight away!  Their lemon drizzle cake and coffee was also very good.  Their stall made £491.45, which they are going to use for phone top-ups, hardship needs and their welcome day in mid-August.

At the other end of the Buttermarket were Tools For Self Reliance, who seemed to be doing a good trade in refurbished tools, and tools made by blacksmiths in Tanzania.  Then there was Fair and Fabulous, selling bags and toys and re-usable containers.  Zaytoun were selling olive oil and other produce from Palestine, and Jump4Timbuktu had silver and leather goods from Tuareg craftsmen in Timbuktu, including a leather chest that looked as if it should be full of treasure!

Then there were local crafts - some beautiful grey pottery, baby clothes from Utopia Designs, and me as the representative of the local Stitch and Bitch group, selling embroideries and paper art.

I was very grateful to the young couple on the Utopia Designs stall, who let me use the chair they'd brought with them - I can't stand all day like I used to be able to! 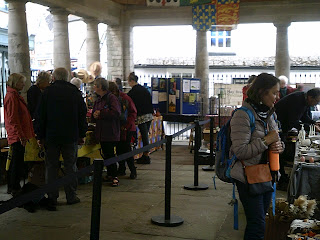 It's been a strange year since I last posted, and of course no real life events could be arranged for Fairtrade Fortnight this year.

However, Fairtrade Fortnight is still going ahead virtually from February 22nd to March 7th.  The theme this year is Climate Justice.

Fairtrade Wales are holding a Climate Change Coffee Morning on Saturday February 27th from 11am to noon via Zoom, to talk about climate change and to hear from Jennipher, a coffee farmer in Uganda.  Her coffee is grown on the slopes of Mt Elgon in Uganda and roasted in Wales, and is both organic and Fairtrade.  Tickets are free, and there is also an opportunity to buy some of Jennipher's coffee before the event.

On Thursday March 4th, from 7pm to 8.30pm, there will be a panel discussion organised by Swansea Fair Trade Forum on Climate Justice for a Fairer World.

Tickets and more information are available from the Fairtrade Wales website.

The Fairtrade Foundation have renewed Hay's status as a Fairtrade Town. Quite a bit of work has to go into providing the evidence for this, so the Fairtrade Hay group are rightly delighted.
The Fairtrade Foundation commented: "Your group has demonstrated dedication to ensure Fairtrade becomes part of daily life in Hay-on-Wye. You have managed to engage successfully with a great number of people and with a variety of local organisations."
We're coming to the end of Fairtrade Fortnight now, and the Fairtrade Hay group are speaking twice to the pupils of Hay School, and showing a short film about cocoa farming in West Africa, as well as a display in the school lobby. The theme this year is the campaign to secure a fair wage for farmers, especially women farmers.
Hay Deli is promoting the Fairtrade Palestinian company Zaytoun in its shop window, with a Saturday tasting session. Zaytoun's range includes olive oil, herb mixes, grains, almonds and dates.
The Fairtrade Hay group are also going to do a survey shortly of shops and businesses in Hay to assess how much Fairtrade produce is offered, and to see where they can encourage an increase. I was involved in the very first such survey - it'll be interesting to compare the two.
Fairtrade Hay meets on the first Monday of every month at 6.30pm in the Blue Boar - new members always welcome!
Posted by Eigon at 19:45 No comments: