Take a Step up Cusop Dingle 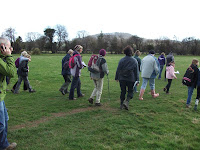 Here we all are, setting off across the fields up one of the loveliest Dingles in the area. There are lots of good footpaths, and this one started off as part of the Offa's Dyke Path. We turned off to cut across the Dingle to Cusop Church, which is now St Mary's, but was originally dedicated to St Cewydd - the Welsh rain saint! We had some pretty heavy rain at the start of the walk, but the sun came out beautifully later.
Twenty one people (and one dog) came on the walk, and a lot of us brought Fairtrade snacks to share.
Posted by Eigon at 13:15 No comments:

At the Fairtrade meeting, last week, one of the members brought along a copy of the Shared Interest annual review. Shared Interest is the only 100% fairtrade lender in the world, and when the Hay group have some money in the bank, we invest it with Shared Interest, knowing that it will be going where it is needed most. It's their Twentieth Anniversary this year, and they are now active in sixty three countries.
Despite a difficult year in the present economic situation, the Annual Review does mention several success stories. The Hadrian's Wall area - ten miles each side of the Roman wall stretching from the east to the west coasts - is the first World Heritage Site, National Trail and international zone to be awarded Fairtrade status! That's a lot of towns, communities, businesses and schools all coming together to make it happen.
Shared Interest now also have a book out, about their achievements. Harriet Lamb, the Executive Director of Fairtrade Foundation, wrote the foreword, saying: "Never has the mission of Shared Interest been more relevant than today, as the organisation celebrates its twentieth anniversary. All around us lies the wreckage of conventional financing. The reluctant recession means tough times for us all. But if it's tough for us, it is desperate for smallholders and workers in developing countries."
They have also made video blogs on the Fairtrade Big Swap theme - swap your conventional item for a Fairtrade version. This led them away from the usual tea and coffee to such exotic Fairtrade items as socks and vodka!
Their website is now on the list of links on the sidebar.
Posted by Eigon at 09:42 No comments:

Fairtrade tent on the Market 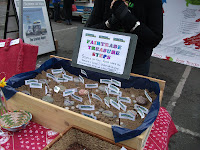 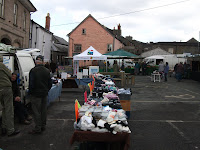 There we are, across the market square - it's more of a gazebo than a tent, so it doesn't look quite as overwhelming as I thought it might, though it does have all four sides if anyone wanted to use it as a marquee.
I arrived at lunchtime, when the Indian lady had gone to speak at Hay School, but Christina was there with the Fairtrade leaflets and the treasure game. You can see by all the little flags in the sand tray that a lot of people had a go! Christina put all the flags that were next to the treasure into the Fairtrade bag (made in Mongolia, from felt) which was the star prize, and I pulled out the winner - Emanation Smith - who was thrilled when she was presented with it later!
Posted by Eigon at 21:08 No comments: