It's a bit of a dismal day (but a lot warmer than some Christmas Fair days have been!), but there's a good spread of stalls in the Buttermarket today.
Free tea, coffee and mince pies (donations gratefully accepted) are being done by the new Refugee group this year. In fact, they have organised a day trip for a group of refugees to visit Hay tomorrow - a treat before Christmas for them.
Martha from Love Zimbabwe was there (I bought a lovely hand printed round tablecloth, with elephants on it, for my round table): 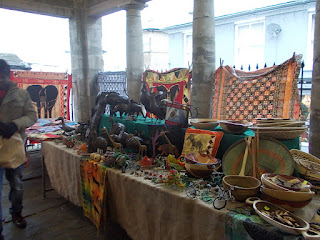 Opposite them was Zimele with Zulu crafts. On the other side of the Buttermarket was Tools for Self Reliance, a display of Tuareg silver jewellery and leatherwork, and knitted and felted goods at the end from the Fairtrade shop at Llandeilo, which I think is called the Dragon's Garden.
Chris, with his Timbuktu twinning hat on, was manning the Tuareg jewellery stall, and also had holly branches, with lots of red berries, and mistletoe. He said that the Fairtrade group are hoping to make enough money from the fair this year to put into Shared Interest again, which loans money to Fairtrade groups around the world.
Posted by Eigon at 13:50 No comments: